The least interesting piece of shitass I’ve seen all year.

When it comes to horror movies I have three classifications; horror, shlock, and shitass. In the first category we have films like The Wolf House, movies that genuinely instill a feeling of discomfort, fear, tension, dread, and uncertainty in the audience. In the second category we have shlock. These films can still be tense, but there’s an added element of goofiness or having to suspend your disbelief. Halloween, Jack in the Box, Candyman, etc. Those are shlock. Shlock can be good and bad. And then there is shitass, a subset of horror movies that instill none of those things and are more just frustrating and boring. That’s Separation. For the most part.

Separation is a 2021 horror film directed by William Brent Bell whose slate of films have yet to break 30% critic scores on Rotten Tomatoes. How About Notflix viewers may recognize Bell’s name as the director of 2020’s Brahms II: The Boy (Is Back In Town) as well as 2012’s The Devil Inside which holds a 5% on Rotten Tomatoes although it made a President Taft-sized haul of cash bringing in over one hundred million at the box office on a budget of about a million dollars. So it’s no surprise the guy continues to get work.

If you’ve been reviewing horror movies as long as I have, you realize that eventually every object and concept will become cursed in its own film. The Projects, Las Vegas, a Jack in the Box, a Daido album, LeBron James’s career, etc. Separation is essentially a movie about a cursed divorce. It stars Rupert Friend as Jeff Vahn, a man who spends most of the film with me wanting to punch him in his stupid face. Friend played the secondary antagonist Lt. Kurt Kotler in The Boy in the Striped Pyjamas, so maybe that’s why his face incites so much anger. Maybe it’s because his stupid hair and stupid expressions in this movie make him look like he studied acting at the academy of Simon Rex.

Jeff Vahn is a barely employed artist in the middle of a messy divorce with his wife Maggie (Mamie Gummer) whose attractiveness I found myself falling for in the opening minutes of the film and then shortly after began filing for my own divorce. From the movie. Maggie plays the kind of vindictive bitch ex-wife that at first made me think this movie must be the passion project of a pissed off divorced dad who feels the court screwed him over. Maggie doesn’t just want to divorce Jeff because he can’t find stable work, she wants full custody of their daughter and for Jeff to never be allowed to see her again. Ya know, a fitting punishment for his temporary lapse in employment. Maggie devolves into such a caricature that she literally gets struck and killed by a moving vehicle because she was too busy breaking him down over the phone to look out for traffic.

Daughter Jenny, played by Violet McGraw is fine. I normally hate children in horror movies and this one is no different. I’m not going to crap on Violet’s acting chops because she’s ten and it’s obvious the screenwriter gave her garbage. There’s a whole subplot about her regressing into babytalk after her mom dies that goes nowhere and it’s so damn annoying along with other parts of the film that I started writing this review right after the credits rolled so I could get it down before it was purged from my mind. Come Play set unrealistic expectations for other modern child actors in my opinion, and we’ll probably never get another Linda Blair.

Also prominently in the film is Madeline Brewer as Samantha Nally, the kind of babysitter every red blooded male wants to have working for them when the wife isn’t around. Samantha clearly wants to haunt Jeff’s bedroom if you catch my drift. Jeff might be Jenny’s father but he can always be Samantha’s daddy. He is wholly uninterested which just makes him all the more unlikeable. Brian Cox is in this film to make you ask why Brian Cox is in this film. Cox was the original Hannibal Lector in the 1986 Manhunter film, why is he playing Mamie Gummer’s dad in this movie? Cox’s job is to spend the film also trying to take custody of Jenny and vaguely accuse Jeff of being the one who murdered her. I did enjoy how Cox has the same demeanor Bill Murray has whenever he’s in a film he doesn’t want to be in, where he does not care how obvious it is that he views the film as beneath him.

But since this is a horror movie, let’s talk about the horror. It sucks. This odd concept of Maggie coming back in the form of a vengeful spirit that looks like a Victorian puppet might have worked with other people at the helm. Here it’s terrible. There’s a double dream sequence in this movie. I don’t understand horror movies where the characters don’t react to the things that are going on around them and it frustrates me. People constantly see very clear supernatural beings in this film and don’t react, like the director only gave them vague ideas of what the scene was about without any real context. There is a scene where Samantha very clearly sees the demon mom, as in she gets wrapped up in the bed and the spirt is several inches away from her face clear as day. Then she runs downstairs and tells Jeff that she had a feeling like there was a presence in the house. There’s no way Bell actually explained to Brewer what she was seeing when they shot that sequence.

This is the kind of acting you get from an unskilled director. 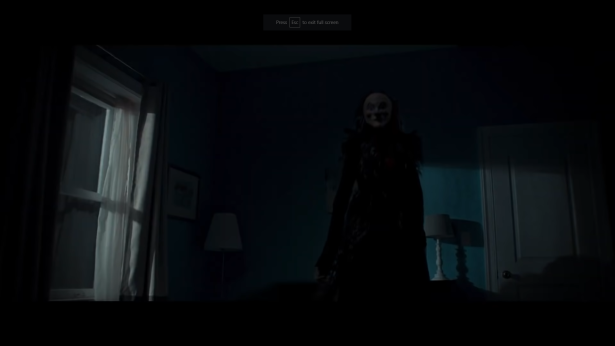 It also doesn’t explain why there’s seemingly another spirit haunting Jeff unaffiliated with the mom. Maybe Jeff was banging the prior babysitter and he also got hit by a car, and we’ll see that in the inevitable prequel sequel. The dream sequences are confusing to the point where they lose all impact, and none of the characters properly react to their surroundings or feel real.

William Brent Bell makes a lot of things, and unfortunately good horror movies isn’t in that list. Outside of the Grisly Kin puppets there’s nothing redeeming about this movie. And it’s 110 minutes to boot.