A show definitely cancelled for season 2.

When the shadow council of 2125 looks back on the first quarter of the 21st century, one period of time that will no doubt make its small mark on history is that period where Netflix and other companies went out of their way and, at their cost of their own success and financial stability, bet and lost everything on promoting “the message.” You know what I’m talking about. And one of those topics to get the point across will be Q-Force, a single season show that committed the worst sin of all; being an unfunny comedy.

Q-Force is a show about a group of unlikely LGBT spies. Steve Maryweather comes out as gay in the military and is banished to ten years of operating out of an office in West LA, where he gets no assignments and leads a team of bored, tired stereotypes played by other actors of varying noteworthiness. Because he’s gay, a thing that definitely happened in American intelligence agencies in 2011. Tired of waiting around, Maryweather decides to lead the team on a mission of their own, unintentionally uncovering a massive crime operation happening within the country. The group then adopts the name Q-Force, because their superiors called the group Queer Force as a derogatory term.

Q-Force’s showrunner is Gabe Liedman, a guy who wrote eight episodes of Brooklyn Nine-Nine, which is a fact more hilarious than the show itself. Brooklyn Nine-Nine happens to be one of my favorite shows of all time, in large part due to the fantastic actors who play a strong cast of characters. Andre Braugher played the hilarious Raymond Holt, captain of the 99 and a man in a loving gay interracial relationship with Kevin Cozner (Marc Evan Jackson). Holt’s struggle and the hurdles he overcame as an openly gay black policeman are a central idea to his character’s development, and his chemistry with Jackson as a couple turned the pair into the impromptu dads of many of the 99 detectives. Also in the show is Rosa, a character that in later seasons comes out as bisexual and has an episode dedicated to coming out to her parents (hello dad Danny Trejo). It doesn’t go well for her. Brooklyn Nine-Nine is a great benchmark for having representation and discussing social issues without beating the viewer over the head, condescending to them, or making them hate the show. It also goes to show how important a well written show is. 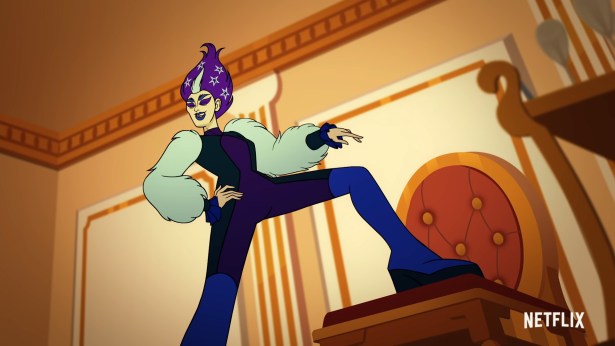 Contrast that to Q-Force’s Steve Maryweather, played by Sean Hayes. What we know from episode one of Q-Force is that Maryweather has ambition and is reckless. That’s basically his only personality trait other than being gay, having sex with men, being attracted to men, having gay sex, and being gay. His one-dimensional status actually makes someone like Xandir from Drawn Together feel like a fleshed out three dimensional personality by comparison. Sean Hayes is not an untalented actor, nor is Wanda Sykes who plays lesbian mechanic Deb and basically makes all of her lines better by sheer charm and personality. I will admit my slight bias toward Laurie Metcalf, who plays deputy director V, having grown up watching her as Jackie Harris on Roseanne.

The big issue with Q Force is that it isn’t funny, and I blame that partially on the presence of Sean Hayes and how much influence he probably had on the script shoving in random gay references. And I like Sean Hayes but he needs someone holding him back or else he’ll saturate a script to the point where it becomes awful. I still enjoy Will & Grace with all of its stupid gay jokes and references. But part of what made that show great was the ensemble cast and seeing them interact with each other live. As an animated show, Q-Force very obviously did not have its actors in the same room recording live and probably didn’t even let them hear each other’s lines as they were recording. It creates a show where the characters are talking to nobody instead of talking to each other and it’s obvious. 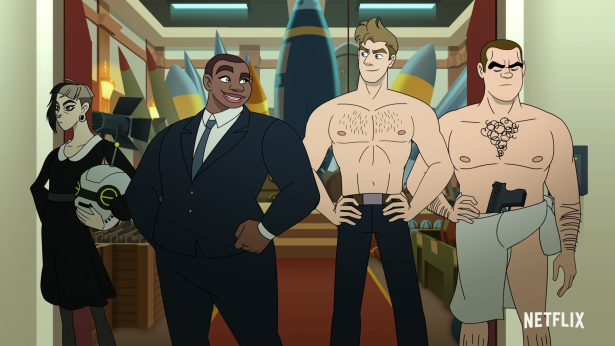 The brutal irony of Q-Force is that if you took a group of outwardly homophobic boomer churchgoers, sat them in a room, and asked them to write their idea of a gay show, what they would come up with is probably not too far from what Netflix released. It’s a show that goes so hard on pushing the idea of exaggerating gay culture that it tends to come off more as condescending, offensive, and you’d be forgiven for assuming the intent was to sabotage the general opinion of LGBT people. It presents its gay characters as one-dimensional stereotypes who think about little more than penis, gay sex, gay references, and gay pop icons. As hard as Wanda Sykes does to improve her character, she’s still just a walking depository of lesbian references. Again it’s hard to tell if showrunner Gabe Liedman just hates gay people and this is his way of blowing up the movement from within.

Twink (Matt Rogers) is the worst offender for this, a drag queen master of disguise spy whose entire personality is being dramatic and throwing out tired, dated, and unfunny references to gay icons, using Tumblr language like safe spaces and saying yaaass queen, and basically acting like how most 70 year old straight corporate CEOs think gay people act whenever pride month comes up and it’s time to spray a rainbow flag on a product made by Asian child slave labor to show how much the companies support human rights. He’s also just unlikeable all around.

I’m not saying companies like Netflix actively hate minorities but they go where they think the money is, hence all the layoffs and show cancellations this year. If racism ever came back in vogue Netflix would be bidding high for a prank show where Jake Paul goes to Compton and just starts shouting the n-word at random poor black people to film their reactions. Take a moment to notice how many non-white/straight creators got shit canned by Netflix and Warner Bros. over the last six months over business issues that weren’t their fault, cancelling projects that probably had higher hopes of success than much of what was left standing. Meanwhile Ezra Miller gets to keep The Flash despite being a pedophilic cult leader literally grooming children and going on a “get arrested in all 50 states” speed-run. Twink also hates Rick Buck, the straight guy forced into the group. 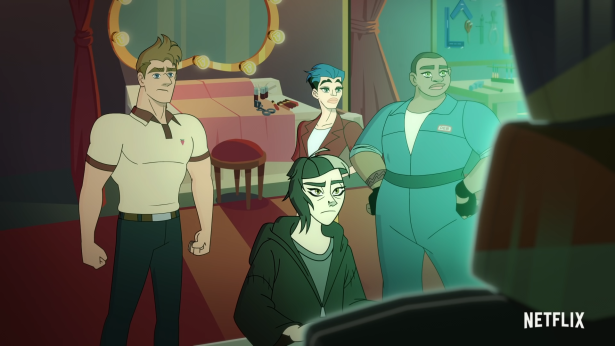 Speaking of which, there’s only a couple of straight men in the show and they’re all angry, stupid, self absorbed jocks who literally brag about enjoying the smell of their own farts. I don’t even care about the representation, but the jokes just aren’t funny. And I’d like to point out yet again that I’m not even against the prospect of a show built on silly gay references, being Will & Grace is still one of my favorite sitcoms, has Sean Hayes in a leading role, and is pumped full of those types of jokes.

The worst thing you can say about a comedy is that it isn’t funny, and Q-Force isn’t funny. It’s a show made by aging out-of-touch creators desperately trying to create something that the young folks would relate to, but they have no understanding of who they are writing for. It’s a big reason why the show ultimately failed and only lasted one season. It lacks self-awareness and you can tell that the creators really thought they were making something big for a show that has all the depth of a teaspoon. It follows the tired Marvel Whedonspeak where nobody knows when to shut the hell up and every character is a facsimile of the same “funny guy” office personality constantly spitting out sarcastic remarks, one-liners, and random pop culture references. I want to know what the drop off in viewers was across the season, because I’m guessing most didn’t make it past episode 2. Or episode 1. 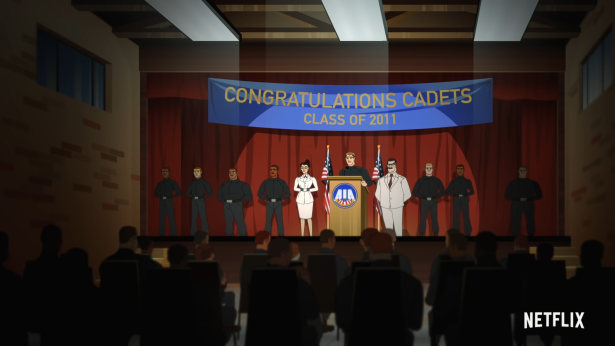 Usually whenever I hear that a show is an “adult animated comedy” I can generally bet that it is lazy uninspired garbage that thinks witty writing can be wholesale replaced by characters who say the fuck word a lot. Q-Force is lazy, uninspired, and garbage. It’s a show that started the premise at “what if we made a show about gay spies” and that’s the extent of the thought that went into its creation. Like many adult animated shows, it’s an easy lazy paycheck for the creators and we’ll probably find out how bad the working conditions were for the animators in the next couple of years. But the animation is pretty good quality. It better be, Titmouse did it.

I hated Q-Force from the first scene, where Maryweather completes a training mission and kicks off by saying “hi bitch” and “bye bitch” while dispatching enemies, because he’s gay and I guess all gay spies act all sassy and gay on missions and stuff. It’s a great preparation for how grating and difficult to get through the two episodes ultimately ended up being. I won’t torture myself by watching the rest of the season, and again it’s really hard to remind myself that this show wasn’t secretly funded by Pureflix and doesn’t exist to openly denigrate gay people under the false premise of being an ally. 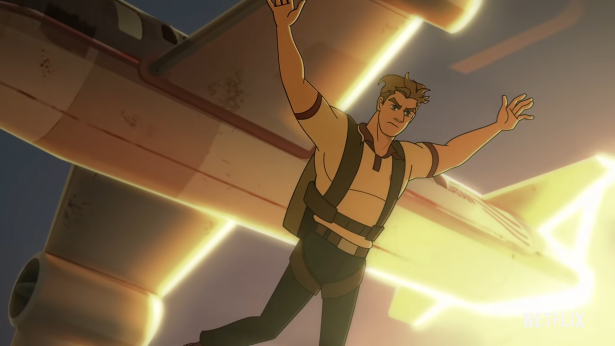 If you want a series that has smart writing and is also about a gay spy, try 2015’s BBC limited series London.