Big Time Adolescence stars a Saturday Night Live name, but it is not a Saturday Night Live movie. That’s an important distinction when you consider just how much utter shite that SNL has tried to stretch from a three minute sketch into a 90 minute feature film over the past three decades. Blues Brothers? Wonderful. Night at the Roxbury? Pathetic. The kind of film that should inspire early retirement.

I like Pete Davidson, he’s one of the few current SNL actors who can maintain an act for a full movie and not come out of it as the latest soul trapped in the Hollywood septic tank known as Happy Madison. He is perfectly typecast as the cool neighbor guy who is also kind of an aimless loser and gets in trouble but has a heart of gold. Fantastic for this film.

Big Time Adolescence stars Griffin Gluck as “Mo,” an awkward high schooler. Mo is about to learn some lessons on relationships and talking to girls and Zeke (Pete Davidson)? He’s going to learn about responsibility! Also people get drunk, smoke weed, and have sex.

I’m surprised to see that this is director James Orley’s first film. The actors come together and play their roles in a way that under worse leadership might seem one dimensional. There are plenty of little bits here and there that bring out each character’s personality. Little quirks like Mo trying to jump over a divider, failing at it awkwardly, and slowly lowering himself underneath it. 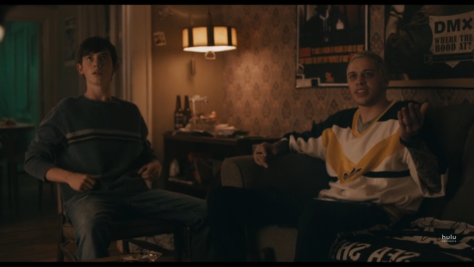 Easily the worst part of this film is Jon Cryer. Maybe it’s the twelve years of playing Alan on Two and a Half Men that has devolved Jon Cryer into a pathetic obnoxious loser whose presence I hate, but Cryer being in any scene just takes the momentum and crashes it into a playground. I don’t even think that Jon Cryer is a bad actor, he has a few good scenes in this film.

There aren’t any surprises to be had with Big Time Adolescence, it’s a coming of age story that has been told a million times over. Strong acting and charismatic actors plus a standard 90 minute runtime make this worth watching. It’s never worth selling your individuality to impress the cool kids and have sex with a hot college chick. I promise.

There is a very well played scene of Zeke teaching Mo how to position himself in baseball to where he’ll never have to swing and get walked every time. It’s a well written analogy to Zeke teaching Mo bad morals to skate through life without any work or real accomplishment.