It’s an analogy of racism.

If you’ve been paying attention to the drama around Hollywood recently, odds are you’re familiar with the ongoing hubbub surrounding the continuous attempts at modernizing and politicizing older franchises. White characters are suddenly minorities, everyone is gay, the men are stupid, useless, and evil, and the women are always smart, incorruptible, and just better than the men. Even the good men. What people miss is that this is less the new Hollywood guard trying to destroy the past as it is studios who are cowards when it comes to taking risks digging through their rolodex of what IPs they own, and handing it to shitty writers.

And I should note that I’m not against the idea of modernizing scripts, making movies progressive, or changing things around. I just care that the movie is good. Spiral wasn’t bad because the plot was about police corruption, its repeated self-sabotaging of pacing and suspense churned out another mediocre film in a series that had been suffering from mediocrity already. The Saved by the Bell reboot on the other hand included just about every character from a conceivable minority spectrum and dealt with modern problems with clever writing and a charming cast. Big difference.

Candyman meanwhile was built off of racism. The original Candyman in 1992 was based off Clive Barker’s The Forbidden short story. It takes place around the Cabrini-Green housing projects on the north side of Chicago, a real place with its own stories of real tragedy. People get murdered a lot in and around the Cabrini-Green projects, and a local tale mentions the Candyman as the culprit. Say his name five times into the mirror and he’ll come kill you.

It’s an express, free suicide booth. It’s also evidence that you do in fact get to choose your summoning gimmick. And when I inevitably get shot to death at a Syracuse gas station and shortly after you see a new challenge trending on the internet involving nipple tassels on your eyeballs, you’ll know my rage demon is here. I won’t be killing anyone, but I will be spoiling any dairy in their fridge.

The latest movie is a direct sequel to the first, ignoring the other sequels that came out also in the 90s. Directed by Nia Costa, who is my age, Candyman takes place long after the events of the first movie, coinciding with the gentrification and modernization of North Chicago. Screenplay is by Jordan Peele, Win Rosenfeld, and Costa again.

Artist Anthony McCoy (Yahya Abdul-Mateen II) is exhibiting his art to make some moneys and impress his girlfriend Brianna Cartwright (Teyonah Parris). McCoy’s paintings aren’t bad, but they’re old school. Showing racism through a bunch of paintings of black men with nooses around their necks. It’s on the nose and, dare I say, uninspired. He searches for new content when he learns of the Candyman.

Inspired, McCoy builds an art exhibit to Candyman leading to the deaths of several of his acquaintances. The deaths bring attention to McCoy’s work and thus more attention to the Candyman myth, leading to more victims and thus more exposure. You very quickly kinda figure that McCoy’s become less of a future victim and more of a vessel to spread the word. Especially since he’s the only one that doesn’t die immediately. They note this in the trailer.

Candyman, or Daniel Robitaille as his real name, is played once again by Tony Todd who has been with the series since 1992. Tony Todd is fantastic, he has one of those faces that he can morph to be completely human yet deeply terrifying when he pulls out his signature grin and extends his arm out with a piece of candy.

One problem inherent to Candyman is that DaCosta took some good ideas and drove them into the ground. There is a really neat concept where we get a backstory told through shadow puppet paper cutouts. It’s impressive the first time around. Second time it loses some luster. The fourth time it’s obvious they’re just doing it to pad out the runtime and because they’re seemingly out of ideas. It also makes less sense as a storytelling technique the further they go. We also didn’t need constant reminders on the origin and technique of Candyman.

Another star of the film is William Burke (Colman Domingo) whose job is to explain the origins of Candyman. Colman Domingo has a fantastically deep voice, and if that man narrated an audio book to help people get to sleep it would be on my Kindle every night at bedtime.

I do like how most of the victims are white, as the film says stuff like summoning the Candyman is ‘some white people shit.’ You do see some non-white characters get killed by Candyman, but they are mostly disassociated from the story and implied to be well-to-do. The 90s era Candyman was always a symbol for the pain and suffering that mostly minority communities in projects like Cabrini-Green face. For a lot of the seemingly random characters who die, it’s just a game they play in front of a mirror they heard about online. The characters we see that came from Cabrini will not say the Candyman’s name, not because they’re afraid of a demonic entity but because it’s seen as utterly disrespectful to the memory of Daniel Robitaille, an innocent man beaten to death by the police and all of the horrible trauma associated with the projects.

There’s also a point where Brianna Cartwright opens a door to show a dark basement, and promptly nopes the hell out of there. There is a little mockery of white people being stupid in horror film situations. 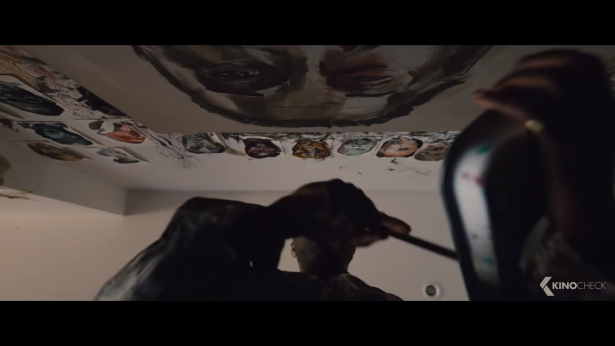 There’s a lot of kiddy pool messaging going on. Characters occasionally mutter the word gentrification with nothing much to say about it. The permanent scar that was the Cabrini-Green projects are there but DaCosta barely spends any time there or focuses on its residents outside of one character. The plot is also easy to recognize if you watched the first film, because you can spot the deliberate inconsistencies from the start. It’s odd.

Ultimately, Candyman is a higher-than-middle of the road horror film. The body horror is utterly disgusting, as McCoy is stung by Candyman’s bee and slowly becomes a human scab. It has its own distinct style over other haunted entity films, and at the end of the day I did find it enjoyable. The fact that the messaging is rather shallow doesn’t quite shock me, it’s a slasher film after all. The visuals are great, especially considering most of the horror bases itself around mirrors.