I wish I had known that Was I Really Kidnapped was a Lifetime original before I spent the $6 to rent it from Amazon. I could have literally written this review without seeing the movie and I could guarantee that nobody would know the difference.

Michelle Mylett plays the adorable Elle Whitland, girlfriend to handsome hunk of man meat and unfortunately named Billy Johnson (original name Richard E. Rection) played by Jacob Blair. Elle shows up at a gas station after being kidnapped for three days and inexplicably released for no reason. As the police investigate, they start to question how much of Elle’s story is true. Frustrated at the lack of police action, Elle takes the law in her own hands; Charles Bronson style.

Well this is a lifetime story, so instead of shooting thugs Elle cutes her way to the truth. You can expect plenty of heartwarming moments like Mylett setting a table for two before pouring herself a glass of wine and settling into dinner on her lonesome.

Can we stop for a second and talk about Elle’s weird-ass sink? 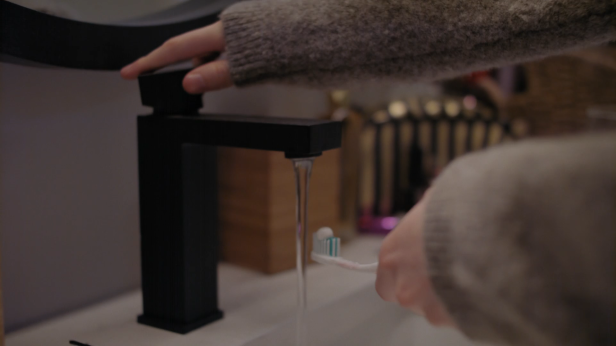 Movies like this make me terrified of getting kidnapped, and not so much because I’m afraid of being held captive by strangers but because if Lifetime movies are accurate they regularly involve getting stabbed in the neck with sedatives. Eugh. Those drugs can’t be safe with the bottle of wine Elle just drank.

Jacob Blair plays Billy Johnson, and immediately becomes a suspect when he starts lying to the police about his alibi the night of the kidnapping. Director Max McGuire does a pretty good job of setting up side characters and having them act just ambiguous enough to play up the whodunnit.

But come on, could a cold-blooded kidnapper wear this shirt and give those puppy dog eyes? You just want to sit him down and feed him Burger King Satisfries.

The dialogue is cheesy, with Billy insightfully responding to the police pointing out his inconsistencies with “I’m sorry, am I a suspect?” to which the detective responds “I don’t know, do I have a reason to suspect you?” The officer then leaves the room and says “I think he’s realizing that he’s a person of interest.” Gee, you think?

Billy Johnson is as adorable as Elle, starting off the movie with what I would consider a light door shutting, to which Elle states “he never slams the door that hard.”

Where the movie becomes real stupid is where Elle’s doctor shows up and the detectives pull a full 180 and start thinking Elle is making the whole thing up. Yes Elle has ketamine in her system and has clearly gone through a trauma and her boyfriend is a bit sketch, but she might be full of crap right?

Unfortunately the mystery is pretty obvious given a very small cast and a small selection of potential culprits. The cast derives itself into a selection of so obviously playing the ambiguous part that you know it’s not them, and so innocent we know you’ll be shocked when you find out it’s the real kidnapper.

The whole kidnapping aspect of the story is for lack of better terms stupid. Elle gets kidnapped and drugged while tied to a bed over the course of three days, then gets dumped at a gas station. Elle’s own investigation starts in the last fifteen minutes and runs roughly four.