Have I mentioned that I love Strangers With Candy?

You can’t talk about Strangers With Candy without referencing the fact that the characters basically live in a bizarro world where up is down, left is right, and normally incredibly unrealistic and morbid ideas are just accepted as reasonable and not even worth questioning.

Dreams on the Rocks starts out at Flatpoint High with Jerri trying out for and receiving the role of Mama in the high school rendition of A Raisin in the Sun. This episode highlights the bizarre world that the characters live in as every part of the play starring African American characters is given to the only three white people in the room. It might be more offensive if it wasn’t for the enthusiastic manner that the room full of distinctly black students applauds the casting decision without a hint of disagreement, or when Geoffrey Jellineck announces that the only remaining part of Walter Scott Lee would be cut, and everyone just sort of nods their heads in understanding.

They are even overjoyed when Geoffrey announces that all of the black students will be cast as trees. This is a running theme in the show. 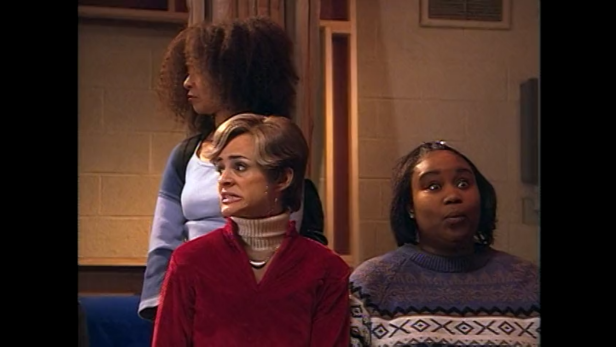 Jerri reveals this news to her step mother who immediately degrades into a slurring alcoholic both pissed at Jerri’s meager high school breakout and reminiscing over her own lost youth. This is easily Deborah Rush’s best episode playing a very convincing drunken Sara Blank. Deborah Rush tends to be typecast as the bitter, mean, generally alcoholic mother/step-mother but she fits the build and plays it so well that you have to love her for it.

After her step-mom ruins the mood at the school parent meeting, Jerri meets up with Craig Snow (Jacob Pitts) who explains that his parents won’t be at the play because they are both non-functioning alcoholics. He hams it up by talking about how his comedic dad hilariously beats his mom.

The episode is lampooning alcoholism as a topic in after school specials generally not utilized to discuss the problems of the parent but instead how it embarrasses the protagonist. Jerri and Craig find Sara passed out in the kitchen and Jerri screams “can’t you imagine the heartbreak I should be feeling?”

Derrick meanwhile goes through the process that every child half his age does when the parental figure is out of the picture, going from walking around in a curtain because “mom didn’t fold the laundry” to eating raw lasagna dipped in a jar of marinara sauce sitting naked at the kitchen table. Geoffrey Jellineck has his own character development of becoming the increasingly abusive and controlling director.

Strangers With Candy has its unique takes on social issues compared to other shows. South Park for instance tends to take an approach lambasting anyone who cares about a particular issue as being equally irrational and ignorant. Strangers With Candy tends to focus on an angle that I think few would genuinely take and then show that as the obviously correct choice.

Craig invites Jerri to a support group for children of alcoholic parents which we learn includes Noblet, Jellineck, and even Principal Blackman who apparently still lives with his parents. The support group is pitched as people who irrationally blame their life’s problems on their parent’s alcoholism. Effectively the group is full of self-indulgent narcissists looking for a source of easy attention. Even Craig gets pissed that Jerri no longer wants to go to the meeting, saying “I thought you had the courage to judge other people on their faults.”

Jerri gives a terrible performance where she either forgets or never learned her lines, which gets a standing ovation from the crowd regardless. Sara shows up drunk to hand Jerri a ham and embarrass herself on stage. This leads to an oddly sincere emotional breakdown as Sara confronts her alcoholism and depression. Naturally the show has to throw the sincerity out the door, as Craig delivers the ultimate lesson; “sometimes when life becomes too painful it’s better to just be a drunk.” He exits with Sara to go get a drink.

The episode ends with Jerri sitting down in an actor chair to have a heart to heart with the audience as she takes her wig off to reveal exactly the same hair underneath. “We had a lot of fun tonight with the idea of alcoholism, but the strange fact remains that eating disorders plague American children.” Careful, the non-sequitur might cause whiplash.

Stephen Colbert comes out to give a reading of Dream Deferred and the cast breaks out into a very stilted dance.

The next episode, Who Wants Cake, derives most of its plot from the unaired pilot.