And I thought I’d already seen the biggest waste of time.

Space Jam 2: 2 Space 2 Jam is now the biggest waste of time I’ve spent in a theater in 2021. If you boiled down the film to its bare essentials, it’s effectively a 115 minute circle jerk between Warner Bros. executives and LeBron James, smashing their hoses together while reminiscing about the times when Warner Bros. had creative talent instead of people leeching off of the nostalgia for content.

Ultimately it’s trash, and the only person who won out in the end was Bugs Bunny who kills himself in the film to get away from everyone. Theoretically none of that is a lie.

Space Jam 2 stars LeBron James as LeBron James, who gets pulled into the Warner Bros. Cyberverse after a rogue artificial intelligence who looks like Don Cheadle yanks in him and his son to challenge them to a basketball game. The overall story of course revolves around the overbearing father who is overbearing because his father was overbearing and he just wants his son to succeed but won’t give him freedom. That old shtick. It sets up LeBron’s son Dominic (Cedric Joe) as an antagonist for most of the film while not playing the trope of brainwashing him.

Perhaps the funniest part of the movie is one that I’m not quite sure is intentional. Al G. Rhythm’s character pitches LeBron an agreement where they scan him and use the scan to artificially insert him into movies. LeBron refuses and says that it’s the stupidest idea he’s ever heard, pitching lazy cash grab movies written by algorithm, shoddily replicating Warner Bros. past success, and selling itself on name recognition. LeBron straight up calls the pitch for Space Jam a shitty idea inside of the movie, only for the film to go ahead with that premise.

And it fits because Space Jam feels like it was written by an algorithm with no oversight by actual humans. In reality Space Jam had six writers, none of whom are known for writing anything you’d care about. Director Malcolm Lee has the shame of having directed the worst Scary Movie and the one that murdered the franchise, Scary Movie V, and when you think about it being the director of the worst Scary Movie film is really an accomplishment in itself.

The entire Space Jam movie seems to be a method for Warner Bros. to flex on its vault of intellectual properties. We get a montage where LeBron goes to each area of the Warnerverse to recruit characters in a page right out of the Seltzberg playbook, referencing films and shows not to make any sort of intelligent statement, or joke, or commentary, but just to remind you that they are there.

There’s nothing intelligent or creative about shoving Looney Tunes into archival footage of Mad Max, or The Matrix, or Casablanca. Lazy writers stealing from creators of the past to make garbage.

The biggest sin of the movie is the basketball match, where the writing team took a look at the concept of creating a tense match and said “screw it, that shit’s boring.” LeBron ends up in a video-game styled match and almost immediately all tension is lost because the viewer, including the players, don’t understand the rules and the points don’t matter. The points fluctuate so much and with so many unknown variables and you figure out pretty quickly that the writers weren’t intelligent enough to remain coherent through an entire basketball game.

It also goes to the movie’s ADD-addled attention span, flipping in tone and speed at moment’s notice. One second they’re playing basketball, the next there’s a rap battle going on for some reason, and oh the rap battle won LeBron’s team points? The writing is so stupid in this film that the writers couldn’t manage a complete basketball game. Did I mention this thing is the collective work of six knuckleheads?

The Looney Tunes characters are horribly underused as the whole film is a big stroke job for LeBron James who is constantly referred to as “King James” by everyone. Kim Jong Un doesn’t demand as much praise. And LeBron for his part is a big fan of Looney Tunes and seems to be the only one actually having a good time making this movie.

Outside of flexing their owned IPs, you know Warner Bros. was targeting this film at YouTube/clickbait shmucks to do word of mouth advertising by creating listicles of all the cameo appearances by characters in the crowd. The end credits of Scoob! where all the other Hanna Barbera characters join in was a bit shameless, but if it sets up more movies/shows it at least had a purpose. This is exceedingly, pathetically, embarrassingly shameless.

Space Jam: New Legacy is a boomer’s idea of what an algorithm is coupled with a Gen-Z’er idea of what Looney Tunes is. It unironically tells a story by which Warner Bros. even with the vast library of intellectual properties and technology capable of pulling real people into the digital world, can’t write a good film worth shit. It’s astounding that WB paints its writers as this incompetent in a film that also proves how incompetent its writers are.

And since the topic is still fresh in people’s minds, I’d like to point out that I don’t care about the controversy of Lola being de-sexualized. OG Space Jam Lola was sexified via the eyes, the midrift, and the pronounced crotch folds in her shorts. The removal of Pepe Le Pew’s scene was stupid. There’s plenty of places on the internet you can go to wax your carrot to a sexy Lola. The world has enough furries without this show introducing another generation. 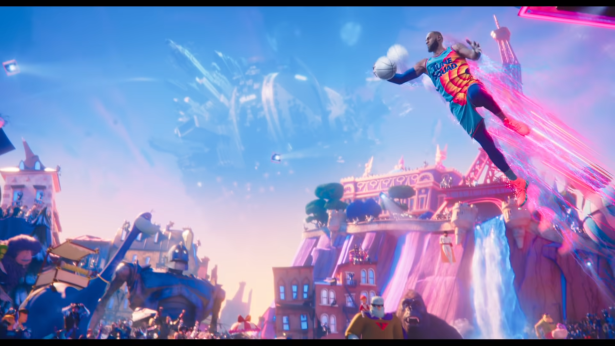 Maybe I’m just bitter because an adult man in the theater started visibly crying when Bugs Bunny killed himself. Perhaps he was so sad because it seemed unfair that Bugs was allowed to leave the movie and we were expected to sit here for another fifteen minutes. Maybe he spilled his Slurpee. I won’t judge the man.

I try not to refer to movies as cynically made, but holy damn is Space Jam: A New Legacy cynical garbage. It is a two hour ad for HBO Max that spends copious amount of time milking LeBron’s prostate while showering him in money. The only person this movie seems to be made for is LeBron James, so I’m not sure why it got a wide release.