The opening scene in Bogie Nights is perfect; we start with Jerri Blank apparently doing a good deed by planting a tree and giving her normal start-of-episode explanation about how she’s a 46 year old teenage runaway ready to start her life anew. And then Jerri makes a comment about how St. Arbors Day isn’t a legal holiday, “but then again neither are most of the Jew ones.” The camera pans back and we see that Jerri’s good deed of planting a tree has been taking place right in front of the pitcher’s mound on a baseball field. I have to imagine there was some little league team pissed at the freshly dug earth after these scenes were shot.

Strangers With Candy is a world where it’s truly difficult to have sympathy for its characters. There are very few people at Flatpoint High that are genuinely innocent, that list consisting mainly of Kimberly Timbers (who is now dead) and Tammi Littlenut. And then there’s Orlando. Orlando’s job in the show is to lust after Jerri despite the fact that she treats him at the start of the show with dismissive contempt which gradually evolves into just flat out racism. Initially shown as sympathetic, Orlando is quickly revealed to be just as selfish, arrogant, vindictive, and prone to violence as the rest of the crew.

This week’s episode starts off right before the Sadie Hawkins dance and since this is a sitcom parody everyone is interested in who main character Jerri Blank is taking to the dance. Everyone including the teachers and even the Principal who has some prime selections for Jerri among the Special Ed department’s violent students. Spike Jabber’s been making eyes at you.

Flatpoint High has a new student; Ricky played by Frederick Koehler who today looks kinda like a dollar store Rich Evans. SWC exists in an alternate reality where everything is exaggerated, so naturally being a new kid at Flatpoint is closer to being an illegal immigrant. I think even in 1999 the only way you could have the principal going on a racist-esque tirade about how he’d like to round up the new students and “put you back on a boat to where you came from” would be to have someone like Onyx Blackman (Greg Hollimon) do it.

Jerri of course is in another pickle. She wants to stay popular at Flatpoint and she’s doing a pretty good job of it so far but she also has the hots for Ricky who everyone hates and whom she is also expected to hate. Because he’s new and different. “I like em old, old and fast” which might make Ricky the only other person to acknowledge Jerri’s age.

There’s something endearing about the way characters in this show dramatically shift based on the theme of the episode. Sara Blank normally couldn’t care less about Jerri’s welfare but is greatly concerned for her safety when Flatpoint’s negligence allows say a potentially retarded student or a new student to wander the halls unsupervised. 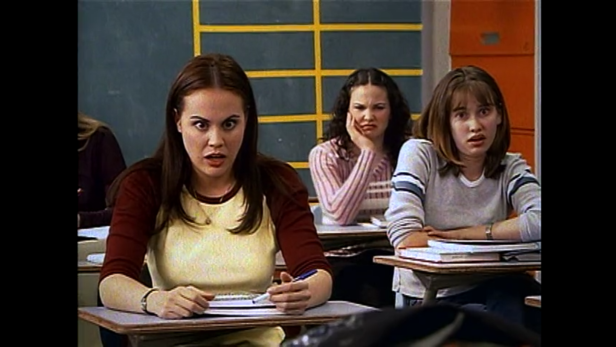 I’d be remiss if I didn’t point out this episode’s health class scene where Coach Wolf gets the girls ready for the Sadie Hawkins dance by teaching them how to wax their privates using Jerri as an example, and the horrified looks on the student’s faces when Jerri drops her pants to reveal a considerable bush.

This episode also introduced probably my most hated term for vagina; bacon strip. It’s not the word itself but the environment and who is casually saying it (note: highschool freshmen girls) that makes it feel even dirtier. It also includes Paul Dinello’s most memorable phrase as Geoffrey Jellineck; “If wishes and buts were clusters of nuts we’d all have a bowl of granola” he says playing the xylophone and right before a drum nearly collides with his head. 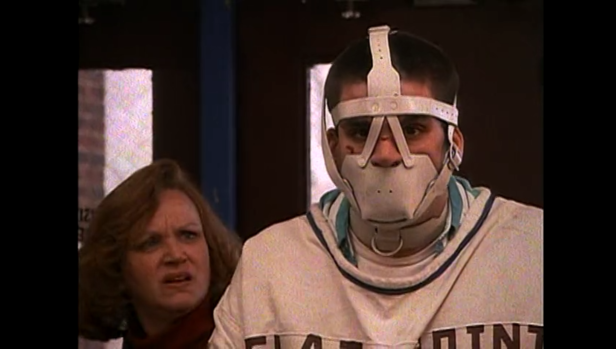 Ricky shows up at Jerri’s house in the middle of the night to reveal his backstory; he’s an orphan whose mother probably was a squat woman with receding hair and a debilitating overbite (which Jerri responds “she sounds pretty”). Get the connection yet? Because Jerri and Ricky don’t. I love the Flatpoint High branding on Spike Jabber’s straight jacket.

Once again even in 1999 I don’t think anyone but Onyx Blackman could have delivered a line like “the last time I checked this school dance wasn’t accepting green cards for los estudiantes nuevos” when trying to boot a new student out of the school. Similarly it had to be Orlando to organize what is essentially a lynch mob to try and brutalize Ricky for the crime of dating a student.

Jerri delivers a nonsense moral lesson that placates the mob and she and Ricky are declared master and mistress of Bogie Nights. The two ride off to make out in the parking lot in a golf cart when they finally have their realization that Jerri is in fact Ricky’s mother and she traded him for a guitar those 15 years ago. Jerri doesn’t seem to understand why this means they can’t make out anymore.

The lesson of this week’s story? Golf cleats can really rip up the gym floor, that the violent make passionate lovers, and that befriending new people can lead to having sex with your children…accidentally. What happened between Ricky and Jerri off-screen?

I love the credits scene where Spike Jabber interrupts a slow dance with Jerri and Ricky to dance with Ricky while Jerri just sort of looks on. Rob Renz, who played Spike Jabber, did not do much TV work outside of his two episode appearance on this show.

One thought on “Strangers With Candy S1E5: Bogie Nights”