I’m pretty sure I’m on a registry now.

Cuties is a French film directed by Maïmouna Doucouré, someone who had they lived in the United States would be restricted from living near an elementary school. But this is France, a country willing to let child rapist Roman Polanski evade criminal prosecution. Sexualizing eleven year old girls is about as uncontroversial as olive oil in Italy.

Our main character Amy lives life in an immigrant family from Senegal who is brought up with ass-backwards third world country traditions where the women are expected to be modest and obedient to their men, and dad can come home and let his new bride live in the house while still married to mom who physically beats the shit out of herself because she’s been cucked and in this culture she is to blame for it. Amy comes into contact with The Cuties, a group of girls who live in the same low income housing and act out by pulling off all kinds of crazy stunts like improv dance routines and trying to film boys dongs at the school restroom. 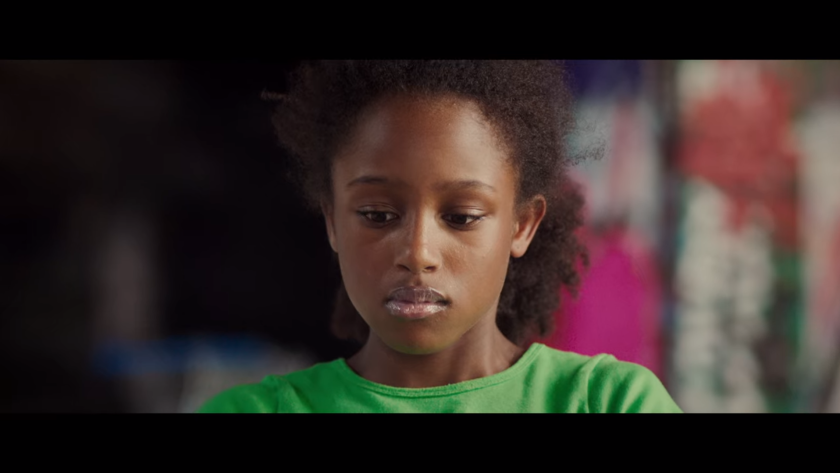 I did get a good chuckle from the scene where Coumba finds a condom and the girls, being sheltered morons, freak out because they’ve been taught that condoms are exclusively used by people with aids. They follow this up by scrubbing Coumba’s mouth with hand soap because it “kills all the germs.” That’s how she avoids catching cancer and aids. I’m not joking about any of this.

The movie’s macguffin is that the Cuties want to get selected for some dance contest, and they need to get their collective asses in gear and figure out a dance routine for the pre-selection. Amy’s eventual acceptance to the group is by teaching them how to twerk, which is about 40 minutes into this 90 minute film and after two instances where the group beats the shit out of her for being weird. This is only the first incredibly awkward moment for the audience.

It’s at about the hour mark that we start getting extended sequences of the girls dancing very sexually and when they start dressing like hookers. I’ve seen genuine snuff films that made me feel less uncomfortable than these sequences, and ones that I feel would be easier to explain to colleagues compared to elongated slow motion scenes of these girls with their fingers in their mouths trying to look seductive.

The point where I expect 99% of the audience will turn on this film, those that hadn’t already, comes at about the 70 minute mark where Amy in an act of defiance takes a photo of her vagina and posts it on the internet. This gets very little acknowledgement. This scene is followed by Amy twerking in a wet t-shirt and panties while her mother and aunt spritz her with what I assume is Muslim holy water. Watching this alone was more off-putting than viewing the blowjob scene from Rocky Horror Picture Show with my dad who was eating a hot dog at the time.

I’d also like to point out that the overwhelming majority of this film’s creepiness comes from the cinematography. The camera lingers too long and at perverted angles and it makes the film feel dirtier than it really needs to. I’m just saying, there’s a major tonal difference between saying someone has a “chubby butt” compared to their “juicy shitbox.” That’s an analogy. Cuties needed another editor to point out how it completely misses its own message.

Incidentally this is the film’s first moment of self-awareness as the girls accuse Amy of ruining their reputation and making them look like strippers and hookers, having previously not appreciated the implications of their dance moves.

If it wasn’t for the children shaking their asses, the worst part of this film would be that it’s completely generic. It’s the story of a young girl who has lived her life being told to act modestly discovering a group of free-spirited girls who show her what it’s like to truly express one’s feelings. In short it’s every coming of age film since the 1970’s. The two sides initially clash because they come from very different cultures, but they learn to work together and eventually become good friends in the name of smashing family tradition. This story is hundreds of years old outside of the mother cuck plot.

There are a lot of things that happen that are basically just glossed over and immediately forgotten, like Amy’s brother flooding the house or her being a crappy camera operator. Amy acts out in defiance by dropping her mother’s phone out the window rather than talk to her father, and the camera immediately cuts to black and it isn’t referenced again. There’s also an odd hallucination scene where Amy’s dress starts flooding the closet with blood from the crotch like the elevator scene in The Shining. I knew this was a coming of age film but I didn’t realize it was a period drama. Ha ha.

Incidentally the most depraved part of this film that is also glossed over is where Amy gets back into the group by attempting to murder her replacement. She tracks down Yasmine who she replaced earlier and who replaced her back, and pushes her into the river watching her drown because she’s a fatty fat fat. Yasmine eventually grabs on to a buoy and Amy simply continues to the contest and explains none of it to the Cuties who simply accept it because she’s there and they’re out of time.

In the second moment of self-awareness Amy realizes how truly disgusting all of this is and flees the stage mid-dance. You even start to get the feeling that her mother is coming around to the idea that the things she’s been taught all her life are total bullshit and it might have had more impact in a film where her daughter wasn’t standing around in neon booty shorts.

One nod I can give to the writer is that the film subverts your expectations for how this movie should have ended. Generally the third act in this genre sees our heroes mend their relationship before the big competition. That doesn’t happen here. I have to assume The Cuties also lost the competition given Amy sabotages them and runs off mid-dance. You can probably also count out the heroes mending their broken relationship since they accepted her back out of convenience and still hated her before going on stage. Amy for her part doesn’t seem too worried that she’s destined for a brutal four-on-one ass-beating at school next week, as she seems to decide her best course is to go back to acting like an awkward kid and leaving all that gross shit to those more qualified.

If you want to see a French coming of age movie that isn’t disgusting I would recommend the early 2010’s film Tomboy.

I’m not going to touch this with a rating.