Let Freedom Ring is one of my favorite episodes of Strangers With Candy from a thematic approach. Going with the first season’s hard stance toward aping after school specials, Let Freedom Ring is all about racism at Flatpoint High kicking off with the spray painting of the no-no racist slur on the wall of the high school. Our titular “here for one episode” character Paul Cotton is the only witness to the incident, but can’t pin the culprit on account of everyone owning the same backpack.

Paul is grilled by Principal Blackman who has decided that Paul is either guilty or knows who spray painted the wall and is hiding it. Jerri takes a liking to young Mr. Cotton having built a career off of being punished for denying things that she’s actually guilty of. Jerri invites Paul over to her home for some sexy time, even going as far as showing him the crack on the liberty bell so to speak, before Paul discovers a can of black spray paint and pegs Jerri as the real racist vandal.

Once again Strangers With Candy’s strong cast comes out to give a stellar performance. Geoffrey Jellineck falls into a state of PTSD having been the first to find the word, and spends the episode naturally making the whole incident about him, mooching donations and generally seeking attention at any opportunity. He does make an oddly relatable quip through his speech of self pity asking students “please, no mylar balloons. They never deflate and I just don’t have the heart to throw them out.” 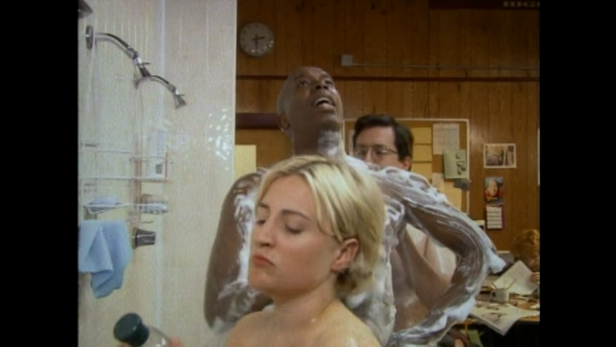 Principal Blackman calls for the assistance of Mr. Percy Kittens, played by Tim Meadows. Mr. Kittens used to be a grief counselor whose policy on dealing with racism is to hold those emotions deep inside and never to tell anyone about it. I guess we know why Mr. Kittens is an ex-counselor.

Let Freedom Ring feels like a commentary on society’s fear of using the N word while casual racism is more or less accepted as part of life. Sarah Blank is offended by the act for the immorality of graffiti, while spraying a black lawn jockey and telling her husband to cut back the “wandering jew” taking over the yard. Jerri tells Paul she can tell he’s not a racist because she’s not a racist, before showing her crude drawing of a Chinaman and going “mung chung ting tung, me rikey you Paur.”

Our ultimate lesson for this episode is that Jerri did in fact write the message on the wall. Why? After stumbling for an answer, she finally lands on “I guess I just don’t like black people.” Principal Blackman and Mr. Kittens seem satisfied by the self-aware admission and Jerri presumably is not punished for her deeds, having learned a lesson. Not a great lesson, but a lesson. Because acknowledgement of racism is the first step toward understanding.

“I’ll make your pinky all stinky” was Amy Sedaris’ line during her audition.