Kevin James is a Neo Nazi.

If there’s one thing I have constantly maintained over the course of my life watching movies it is that Adam Sandler is a talented guy as is Kevin James in the wheel of Happy Madison SNL alumni. Chris Rock is a funny comedian. Then you get to the talentless hacks like David Spade, Nick Swardson, Rob Schneider, and more.

So when I learned that Kevin James would be playing a serious role in what is essentially adult Home Alone it didn’t surprise. At no point did I doubt that Kevin James could pull off an evil Neo Nazi prison escapee with a pension for violence, because the dude pulls off the look to a T.

Becky is a film about a girl named Becky (Lulu Wilson) who is not happy that her father Jeff (Joel McHale) is planning on marrying Kayla (Amanda Brugel) and bringing her and her son Ty (Isiah Rockcliffe) to come live with them. Becky is a troubled teen rocked by the recent death of her mother and enraged that her father is considering getting married so soon after. Meanwhile on the other side of town Dominick (Kevin James) orchestrates a breakout with several other prisoners including hulking monstrosity Apex (Robert Maillet) and Cole (Ryan McDonald).

The four head to Jeff’s summer bungalow to spend the weekend when Dominick and his crew roll up and take them all hostage with the exception of Becky who had just performed a convenient walk-off in frustration. Dominick wants a key that Becky has and he’s willing to do whatever it takes to force her to bring it back.

Shockingly the best performances in this movie come from Lulu Wilson and Kevin James respectively. Kevin James is a big guy so it’s no surprise that if you throw a beard and a bunch of Nazi tattoos on the guy he becomes very intimidating especially paired up against a tiny teenage girl. He is quiet, composed, and will not hesitate to show just how dangerous of a force he can be. 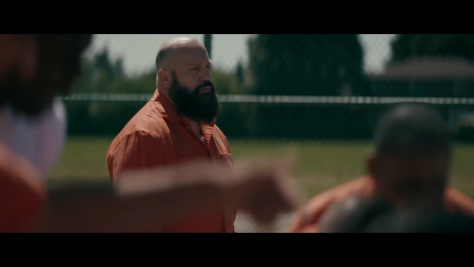 The worst performance of the movie is Joel McHale who basically plays Jeff Winger from Community. His snark and sarcasm feels out of place and sticks out like a sore thumb. Everyone else does a great job of portraying their individual personalities.

Becky feels like someone watched Home Alone and spent the whole time complaining about how Marv and Harry would have definitely been killed by Kevin’s traps or theorizing that Kevin McCallister was actually a violent psychopath in disguise. We even get that moment where Becky shouts the “you better come catch me before I call the police!”

Ultimately Becky is a much more intelligently written film than I expected, down to the fact that it somewhat satisfyingly explains why Becky transforms into this violent killer going on a murder spree. It can be heartless at times and it is disgusting in its portrayal of blood and gore and all the better for it.

They do set the film up for a sequel which Lulu Wilson has expressed interest in. I don’t know if I’ll be watching this again any time soon, but it’s not going in the trash pile of Redbox DVDs.