Leave it up to Disney to pull a WandaVision.

Three episodes into Loki and the series is quickly becoming the most interesting of the current Disney+ crop. Yes that’s not as impressive when you consider there are three Disney+ Marvel shows, but hear me out. The show is leaning toward the unpredictable and when it comes to the creatively bankrupt Disney, unpredictable can be a good thing. It’s certainly more entertaining than Falcon’s “that tough dude is actually a tiny chick” plot twist.

Loki episode 2 was an interesting expansion into how the universe works not to mention revealing cracks in the seemingly unbreakable walls of the TVA. The TVA might be a powerful entity and Mobius M. Mobius has power over Loki because of his extensive research into the subject. But as Loki points out, even the TVA can be overconfident in its own power and not realize what’s going on under its own nose.

Episode 2 also introduced us to the new lady Loki (Sophia Di Martino), another variant and at least up until episode 3 set up as the primary antagonist of the season. We know by now that the TVA has killed a lot of Lokis.  A lot of them, each with their own variation of powers and physique. Presumably we’ll eventually get an answer to the question of where are all these Lokis coming from, what is creating them, and whether there is a bigger force at play. 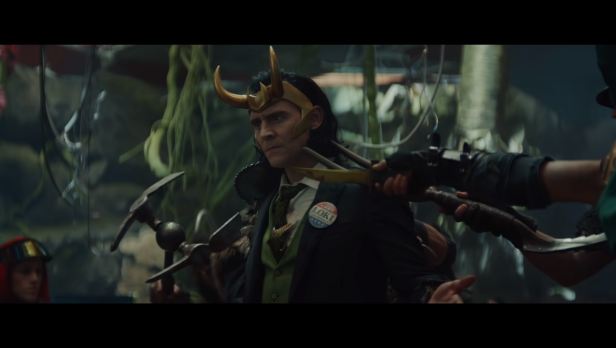 Episode 3 meanwhile feels like the showrunners got bored with the time cop deal. The episode involves Loki and Lady Loki learning to work together as Loki inadvertently strands the both of them on the doomed moon of Lamentis-1. The time bombs dropped at the end of episode 2 are going to have to wait until at least episode 4, if not later, to be attended to, as are the fates of Mobius and crew.

The two Lokis are fantastic in this version primarily because Di Martino isn’t trying to be “Loki but a woman.” The revelation of her name being Sylvie immediately generates speculation that this is the MCU’s way of introducing Enchantress into the world. The second Enchantress in the comics is Sylvie Lushton, who incidentally is given her powers by Loki.

Between episode 2 and 3, Loki takes the plot of the show as presented in the initial trailer and episode 1 and breaks it over its knee. The guise of a time traveling cop show has unraveled and is a thing of the past, or future depending on how you view it, and at this juncture the show could pretty much go anywhere. It’s reminiscent of how WandaVision built a cadence of a sitcom through the decades before becoming a different show entirely.

One of the bigger revelations of episode 3 is that the TVA workers are real people. Up until now we’d been led to believe that the Time Keepers had created the TVA workers, but here we learn that they are all variants that were plucked from time and hired. What effect will this have on the story? Good question. No doubt if Mobius and Loki ever chat again it will come up.

At the end of episode 3 we see Loki and Sylvie’s plans fail as the moon awaits its imminent destruction. With three episodes left in the season and a second season confirmed, it seems unlikely that the two are going to die. If I was a betting man, I’d go on a limb and say Mobius is going to show up just in time to save them and if that happens Loki is going to meet the business end of B-15’s beating stick. On the other hand they might be saved by another Loki, because the way you one-up an episode with two Lokis is one with three.