I almost didn’t watch Squid Game. My brain has a tendency to do this thing where I see movies or shows that release to an almost exaggerated enthusiasm and it turns me off of it entirely. It’s not because I’m some jackass who deliberately goes against the public opinion, but because there’s really no such thing as going viral these days. Especially when it comes to corporate products, going viral is such a deliberate collaborative approach by the media that it really doesn’t mean anything. Surprise viral shows take months of engineering.

Squid Game released a month ago and has since gone on to be a huge hit. The Korean show was inspired in part by Battle Royale and other similar Japanese manga series, and the director/writer Hwang Dong-hyuk has been trying to get the show greenlit for over a decade now before finding home with Netflix who have been trying to boost their international production lineup. And good for them.

It follows the main protagonist Seong Gi-hun (Lee Jung-jae) and a multitude of other characters who all find themselves as players in a game put on by a mysterious benefactor. 456 players, all of whom are massively in-debt, are taken to an island where they must take part in a series of childhood games like red light, green light. Those who survive the six games are declared the winner and receive a share of the cash payout. Players who are eliminated are killed, and for every player who dies another 100 million won is added to the prize pool for a grand potential total of 45.6 billion.

Overseeing everything is a man in a Dr. Doom mask bearing a calm demeanor and a spooky deep voice. Also keeping an eye on players is a legion of pink-suited men with masks that carry a square, a triangle, or a circle on them. In other words, this is a hint on how Sony will be determine eligibility to buy a PlayStation 5 going forward. Who is this man? Who are these people? Why are they doing this thing? How many of these questions will actually be answered?

While Squid Game feels like it might devolve into a Saw-like scenario where the show exists as torture porn while pretending to be teaching the players a lesson, the show never goes off in that direction. In fact I was surprised to see that over the first three and a half hours only maybe ten minutes are dedicated to playing the game. With a starting cast of 456 players, plus the soldiers, plus the front man, plus some other extra characters, there are a lot of people to keep track of. There is a core cast of 20-odd characters that get far more screen time, have slightly more plot armor, and display much more personality than the rest of the cast, for obvious reasons, and the show takes no great pain to start dwindling the numbers of needless extras pretty fast.

There’s a brilliance in how Squid Game sets up the world the players live in. These stories tend to remove agency from the players, thrusting them into a battle for survival against their will. In Battle Royale for instance the students are forced to fight by a totalitarian government. The players in Squid Game meanwhile are all there on their own volition, and even once it becomes apparent how deadly the games truly are the survivors always have a fair opportunity to end the game and go home if the majority wish so, with the caveat being that the survivors get none of the money and the winnings go to the families of the deceased. And why should they get money? They lost!

There’s an interpretation of Squid Game that would conclude the show is an indictment on the audience; that we are by measure the men in the suits. Safe behind our screens and anonymous to one another, silently watching as people are reduced to numbers and then brutally killed for entertainment and uncaring for the inhumanity because hey, it’s just a show. But while similar stories (Hunger Games comes to mind) tend to poke their finger in the face of the viewer and condemn them for enjoying the thing that was deliberately created and released for their enjoyment, Squid Game never comes off as a condescending piece that pats itself on the back for exposing the “real evils” of humanity.

Also of note is that the games are a rather minor part of Squid Game, with a great majority of the show’s content centered around the characters, watching their personalities develop, learning about their backstories, and seeing them interact with each other as the games continue. There’s also a fair variety of subplots with characters going around and doing their thing, such as the Korean police officer trying to track down his brother who was taken to the island, a subplot about the pink soldiers themselves, and of course the unseen man in charge and his motivations for hosting these games. It’s evident early on that this isn’t the first Squid Game. Saying Squid Game is all about the murder game is akin to concluding Orange is the New Black was just about lesbian sex scenes.

Everything culminates in a show that is really fun to watch and on the back four episodes will really tug at your heart. You won’t come out of it with any grand inspiration on life, but it’s fun. It’s just fun. Nine episodes each 50-60 minutes except for episode 8 which runs in at 32 minutes for a really good reason. The games themselves are pretty creative not just in their presentation, but in how the show bastardizes them to be evil. The whole bastardizing a happy thing has been a trope for a while now, and I’m pretty sure Jeepers Creepers had a hand in kicking it off as a cultural phenomenon.

As a show based in the struggle of the impoverished, Squid Game’s first season ends in a way that answers the important questions while not over-explaining things, and sets up the potential for a second season should Netflix pursue it. After all there will always be poor people and rich people, and that means someone willing to fund a Squid Game and those willing to participate in it. 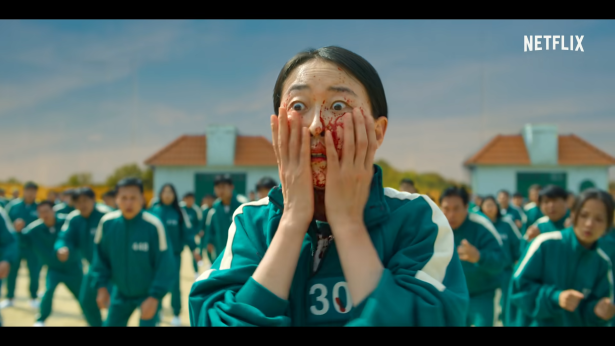