What an eternal bore.

It’s kinda crazy to think that if Covid-19 had never happened that we’d be just about wrapping up phase four of the MCU at this point in the timeline, but here we are. 2021 has been jam packed with MCU crap considering while the film portion didn’t kick off until July with Black Widow followed by Shang-Chi and Venom, we had the first seasons of WandaVision, Falcon, Loki, What If…?, and the rest of the year still has Hawkeye season one and the new Spider-Man film. And once we get into 2022 you’re looking at Ms. Marvel, Moon Knight, She-Hulk, Secret Invasion, Dr. Strange, Thor, and Black Panther. Jesus Christmas.

At one point you have to feel bad for the writers and directors that Marvel brings on to create these post-Endgame new-hero movies, because they have the increasingly arduous task of explaining how these super powerful characters have been around canonically the whole time yet for one reason or another never interfered with previous events. The Eternals cast director Chloé Zhao with explaining why nearly godlike beings that have been around for thousands of years didn’t interfere when Thanos wiped out half of all life in the galaxy. The answer? Eh, they weren’t allowed to by some decree or something.

The Eternals kicks off in one of the worst ways possible; scrolling exposition text over silence. While not entirely a movie killer in itself, it’s indicative of the overly expository and poor pacing of the film yet to come. All two and a half hours of it. The Eternals were sent to Earth in 5,000 BC to destroy the deviants, a race of monsters hell bent on destroying life across the galaxy. Presuming to have finished their mission in 1500, the Eternals integrate into the world while waiting for instructions on when they can return home. Those instructions never come.

In the meantime the characters have since settled down. Sersi (Gemma Chan) is a museum curator because every movie about immortal beings requires at least one to work in a museum. Sersi also dates Kit Harrington who plays Dane Whitman, because what red-blooded woman wouldn’t want a taste of John’s Snow? Homelander knockoff Icarus (Richard Madden) is doing his own thing. Thena (Angelina Jolie) develops a form of space dementia in the ensuing years while being looked after by Gilgamesh (Don Lee) who does big fist stuff. Phastos (Brian Tyree Henry) has settled down with a human family while Kingo (Kumail Nanjiani) became a Bollywood superstar, and Sprite (Lia McHugh) lives with the curse of persistently looking like a twelve year old child.

Remember when I said that they assumed to have killed off all the deviants in 1500? Shocking as it may seem, we learn very early that this isn’t quite the case. There are still deviants on Earth and for some reason they now appear to be directly targeting Eternals instead of their normal routine of being aimless violent bastards. There’s also something about an Emergence event that will happen in seven days time and probably wipe out all life on the planet. There’s an odd note one character makes about how this event would have happened years prior were it not for the Thanos snap. Honestly you’d be forgiven for not knowing exactly what was going on during this movie.

One big problem with Eternals is that the movie feels the need to remind us that they were mostly doing stuff in that five thousand year span of time, meaning the film regularly slams on the breaks in order to go into an extended flashback. These flashbacks only serve to highlight the absurdity of the premise, including the fact that these eternal beings have apparently talked with 21st century lingo for thousands of years and using words that didn’t exist yet. It also shows how very little development any of these characters had over the last seven thousand years. It all comes to a head in my opinion when we see Phastos mourning in the rubble at Hiroshima. 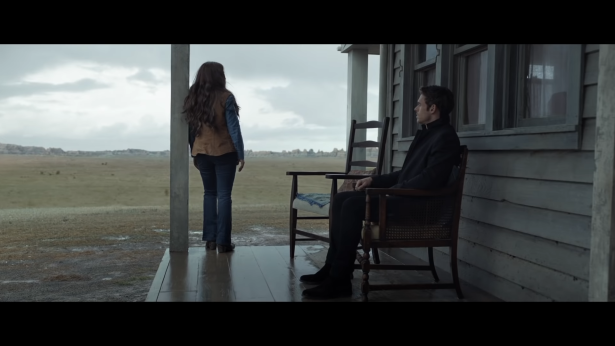 Eternals is boring, a 160 minute slog as we make our way to the final battle and I sit in the audience wondering how Earth’s mightiest heroes haven’t noticed any of these big superhero fights happening. It suffers from having way too large of a cast and spreading its attention wide enough that nobody seems to get proper development. The MCU is no stranger to having artsy directors like James Gunn or Taika Waititi direct films and add their own flavor, only Zhao was asked to start us off with an Avengers size cast with none of the build up we got for those characters.

As a wholly forgettable movie, Eternals is up there with Thor: Dark World on films you’ll think back to in a year and remember maybe one plot point.