She-Hulk is officially one third of the way done and the best thing I can say about the show is that it isn’t the dumpster fire we kind of assumed it would be back when the trailer came out. I will even go as far as to say that between binging Ms. Marvel and the first few episodes of She-Hulk, that my interest in the Marvel Cinematic Universe has gone from exhaustion to tepid interest. Not enough to watch the episodes on day one, mind you, although I stumbled on this one by accident, but enough that I’m going to keep watching unlike Falcon and the Winter Soldier.

Episode 3 of She-Hulk might be the one that’s kept me the most entertained. The A story of the episode revolves around Jennifer Walters continuing to work on Abomination’s parole case. The last episode ended on a cliffhanger as someone pirated a copy of Shang-Chi and realized that Abomination was in it as an extra. Even in the Marvel universe nobody went to go see Shang-Chi. Anyway, Walters has the job of tracking down Wong in order to convince him to explain to the board why he removed Abomination from a maximum security prison, and had him in a fighting ring. 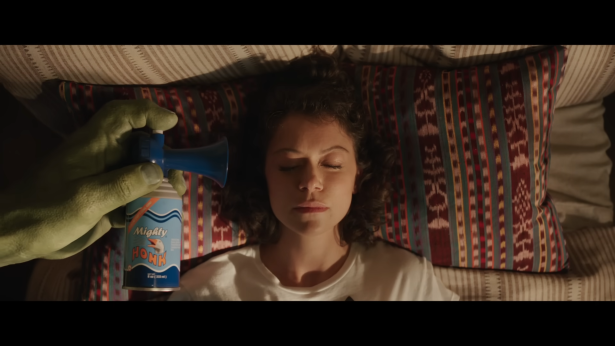 The shocker of this story is that it builds up into making you think Wong is just going to blow the whole thing off, but he actually shows up at the parole hearing albeit somewhat late. I’m sure we’ll get a scene in a future Marvel movie where Wong suddenly hears the time and says “I have some prior business to attend to” before leaping into his portal so the audience can see the hearing just slightly obscured. This is referenced in a nice fourth wall breaking scene where Walters explains that the show isn’t going to be a weekly cameo bit before counting down all the cameo appearances. Blonsky successfully shows his ability to control transformation and himself as Abomination and he gets his parole.

Meanwhile the B-plot revolves against Douchebag Von Cracker, aka Dennis Bukowski (Drew Matthews) who files a lawsuit against Asgardian resident and shape-shifting elf Runa (Peg O’Keef). I think people were expecting that Runa would be part of a buildup to the whole secret wars event that’s coming up, but her part in the story is more comic relief. Runa used her shapeshifting powers to impersonate Megan Thee Stallion to scam Bukowski, a man whose head is so far up his own ass that he believes he can date Megan Thee Stallion, to the tune of $175,000 in gifts. Runa attempts several times to deceive people by shifting forms and fails every time. She loses the lawsuit and is also sentenced to prison for impersonating the judge at one point.

Megan Thee Stallion herself appears at a point in the story because who wouldn’t want an easy scene for an easy paycheck?

The episode does set up a new set of villains; The Wrecking Crew. These are folks who probably exist in the comics, four dudes who literally robbed an Asgardian construction worker and stole his tools. And since the tools are Asgardian, they’re basically lethal weapons on Earth. The four fail to put a dent on She-Hulk, but the underlying goal was to extract her blood which they also fail at. Somehow I feel like Jennifer getting her blood taken is going to be a plot point. I also feel like some villain getting Hulk blood in their system and Hulking out will become a plot point.

I’m sure some comic dork has memorized the last thirty years of Hulk and She Hulk and could tell me where the plot is obviously going, and then I’d give him a wedgie and say “shut up nerd”. The show is fine. Dare I go as far as to say…interesting?