I think I had the same reaction of most other Ju-on fans when we learned that the series would be coming to Netflix in the form of an original show: Is it time already to watch another beloved series die? Actually that’s not completely true, as I would argue that Ju-on gracefully exited this earth in 2015 with the Japanese release of The Final Curse and everything after that has been an echo. A ghost of a ghost if you will.

An echo that brought us 2016’s joke that went too far; Sadako vs. Kayako, a film that taught us even Koji Shiraishi wasn’t immune from making complete garbage. The first indication that this movie was going to be crap is probably when they partnered with Hello Kitty. Yea, I’m not joking. Ju-on and Ringu collaborating with Hello Kitty.

Flash forward to 2020 and we got the American reboot known only as The Grudge. My take on the movie is far more lenient than most critics and even I think the film is crap. A reboot that does nothing but retread the dug-in tire tracks of its predecessors. Ford rebuilding the Pinto just to have it explode again.

But the Netflix series is called Origins and that means another origin story. Before you start shouting, let me just say that this isn’t what you are thinking. We’re not going to retread the same story that people have been investigating in every single movie since 2000.

When you think Ju-on origin story you probably imagine Kayako, Takeo, and Toshio. But Kayako wasn’t the origin of the Ju-on curse, she just adopted it and became the face of it like a really morbid mascot. The actual curse is imprinted into the house itself and part of the deal is that it infects those who enter it in various ways. So lose the anticipation for gurgly throat noises, spider corpse-walks, and kids who scream like cats. We’re going further back in the timeline than that and boy is it messed up.

I can’t comment on this seriously enough when I say that Ju-on Origins is a deeply disturbing show for Netflix featuring pretty graphic depictions of rape, very violent murder, and domestic abuse. While it doesn’t reach the levels of 1970’s era Italian horror films I think it’s safe to say that Ju-on deserves whatever trigger warnings it earns in the process. The film series has never been particularly sunny or optimistic but some of the older films look like Barney episodes compared to this.

Ju-on Origins is definitely a show you need to pay attention to, preferably in its original Japanese vocals with subtitles. The dubbing will definitely take you out of the moment. Origins features a massive cast across decades as the show aims to cover an anthology of families interacting with the cursed house and how interwoven their stories are with each other and with the eventual entry of Kayako and her lasting impression.

I’m most impressed with the fact that Origins manages to take this massive cast and make each character feel important and solid. The pervasive “hero” of sorts is a paranormal investigator that becomes obsessed with the house for reasons he can’t quite explain. Instead of Kayako creaking around the house the honor of spooky ghost lady belongs to the ever-terrorizing Woman in White who seems to be more of a casual influencer than crazed demon.

There are some themes present from the Ju-on we all know and love, like every generation of house victims seems to have cats somewhere in its plot. Thankfully we don’t get that comically reused scene of the character showering when the hand comes out of the back of their head. 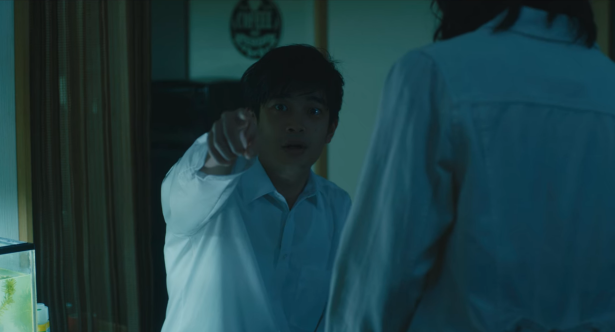 What is interesting is how the house affects each character, because it doesn’t necessarily just turn them into insane murderers. There is a logical if twisted connection between who the curse targets, how it affects them, and why it makes them do what it does. But the connecting theme in all of these stories is betrayal and revenge.

But Origins gets its impact from the fact that the terrible acts portrayed in the show are done by people. People under the influence of the curse, but people nonetheless, and we the viewer get to see their pain and suffering turned into neverending revenge.

As with any origin story the first question I have to ask is did this need to be told. For most properties? Absolutely not. For Ju-on? Absolutely, because it feels like it adds something of value without treading on the established story.

Overall the story can get messy and confusing.