What the hell did I just watch?

Over the last couple of years one thing I’ve tried to point out in my reviews is that I have a bit of nose for telling when a movie is the passion project of its director and when it’s a cynical corporate piece cobbled together on an assembly line and pushed out the door for the masses. Take for example the recent title Miracle Valley, a film that for all its issues was clearly straight from the chiseled heart of Greg Sestero. Compare that to The Gateway, a sloppy shart created because the actors needed a paycheck and directed by someone who probably doesn’t even remember he made it.

Which brings me to today’s review; The Munsters. I loved The Munsters when I was a kid, watching the show on Nick at Nite and not really understanding why the episodes were in black and white outside of that’s how shows looked back when there were three channels. It was easy to go into the Munsters with some cynicism. We’ve endured decades of shows being rebooted with varying results, often leaning toward the lazy and cynical for little purpose other than because the studio owns the rights and wants to produce something on the cheap with shitty writers who couldn’t care less about the source. The Munsters also feels like one of those properties that you look at and wonder “why now?” Why not? 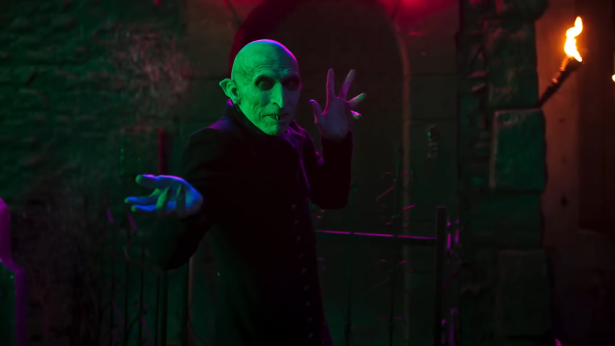 Directed by Rob Zombie, The Munsters stars Sheri Moon Zombie as Lily Munster, a vampire woman who is desperately seeking the love of her life as she turns 150. She finds it in the form of Herman Munster (Jeff Daniel Phillips), not so much an homage as a clear cut reprint of Frankenstein’s monster. Daniel Roebuck plays The Count, Lily’s incredibly hard to impress father aka Grandpa Munster although in this film he’s just normal dad Munster. Richard Brake plays Dr. Henry Augustus Wolfgang, the scientist that brings Herman to life, with Jorge Garcia as Floop, Wolfgang’s Igor of sorts. Sylvester McCoy is here as Igor, actually.

If you had told me that Rob Zombie made The Munsters purely for his own enjoyment and only released it publicly because the studio forced him to, I wouldn’t be too shocked. It feels like a film that wasn’t entirely made with the idea of mass distribution or being shown to many more people other than Zombie and his friends, and that’s not a bad thing. I have no doubt in my mind that most of the bitter millennial critics working for Collider or Decider or Bloody Disgusting are going to hate this movie because it’s not a cynical modern recreation and doesn’t have any comments about modern politics, no digs at Trump, and none of the characters are race/gender swapped. I believe it’s set in the 60s as an actual prequel. It’s not bogged down by trendy nihilism and it doesn’t make you feel bad that you’re watching a movie instead of worrying about the real world going on around you for another two hours.

I have to say it’s a charming film.

Every character in this movie including the extras feels like a moderate exaggeration of a real person. The bulk of the film takes place in Transylvania with a plot involving Lester Munster (Tomas Boykin) trying to convince Grandpa Munster to sell the house, partly because he needs to pay back some expensive loans to the witch Zoya Krupp (Catherine Schell). Lily and Herman meet and of course it’s love at first sight, and the two fall madly head over heels for one another. The running gag with shows like The Munsters and The Addams Family was of course the idea of the ghoulish family and their upside down ways. Lily talks about how Herman gives her nightmares and cools her cold dead heart with nothing but love. Get it? It’s the opposite. Because they’re monsters.

But the show comes from that positive time in the 60s where everything on TV was light and breezy, so even the monster family despite having their disagreements from time to time was portrayed as having unconditional love for each other. Rob Zombie fits that directly into this movie, with a cheesy and goofy and oddly endearing quality that once again shows the guy is clearly a fan of the show. They speed up the shot for comic effect, characters are placed in front of cheesy rotating lights with hearts to show that they’re in love, there’s a bit of slapstick humor and off the cuff references to characters drinking blood, and while almost none of the jokes are funny in themselves, it’s the way the movie presents them that put a smile on my face for most of the two hours.

Oh yea, the movie is almost two hours, at 110 minutes. But it’s a cornball stuffed in a cheese fest that delights in its positivity and goofiness, and frankly it’s a good time overall. Much like the show from the 60s the movie isn’t too interested in keeping the audience following a tight plot. In fact it barely tolerates the overall plot being part of the film and pretty much just throws it out the window at one point. Just sit back and enjoy. The actors are true to the characters with Daniel Roebuck playing possibly the best Grandpa Munster since the original show, and overall it feels like everyone just had a great time shooting this movie, including Rob Zombie himself. And for that, I have to give it a thumbs up.

Check it out on Netflix.