You don’t get much more divisive of a film than the likes of Butt Boy, it is a title whose very premise will immediately turn off the people who probably wouldn’t have liked it anyway, while also being one of those films that obscure arthouse film buffs enjoy watching and chatting about.

Butt Boy stars Tyler Cornack as Chip Gutchell. At the start of our film Chip goes to the proctologist to get a finger up the ass and he discovers a long dormant secret; he loves having things shoved up his ass. The desire turns to desperation and then obsession as Chip shoves increasingly hefty objects through his brown starfish including dinnerware and the TV remote. His obsession takes a dark turn when Chip turns serial killer and claims both the family dog and a random child from the park.

In short, this is a movie stars an anti-hero that any man who has ever been to the proctologist can relate to.

Unsurprisingly Tyler Cornack is also the director and writer of this movie. Tyler Rice plays the role of Detective Russel Fox who finds himself in pursuit of Chip who also happens to be Fox’s AA sponsor. Fox follows the trail of hairy dingleberries in an effort to prove his theory that Chip is the secret serial killer. None of what I have just said is fake.

Tyler Rice plays the perfect role of the greasy city gumshoe detective while Tyler Cornack looks like the kind of guy who you would see on the news after the police discover the child graves hidden in his basement. The whole cast is made up of people you have never heard of unless you are a big fan of indie short films or happened to catch them in their single episode appearances on various tv shows.

The performances in this movie are very well done, surprisingly well done even. The film does a great job of mixing the intense with the absurd, and is shockingly well produced for a film where a man shoves children up his ass and digests them. It reminds me of films like Rubber that takes a completely ridiculous premise and plays it with a straight face like there is nothing out of the ordinary.

You see generally a detective would pursue many other theories before concluding that a grown man is shoving children up his ass. Detective Fox gets there almost immediately.

There are some glaring issues with the production including a couple of scenes with horrible ADR dubbing and a few moments where you can see artifacting on the character’s lips and faces from not so great color correction. It doesn’t take away from the overall film. 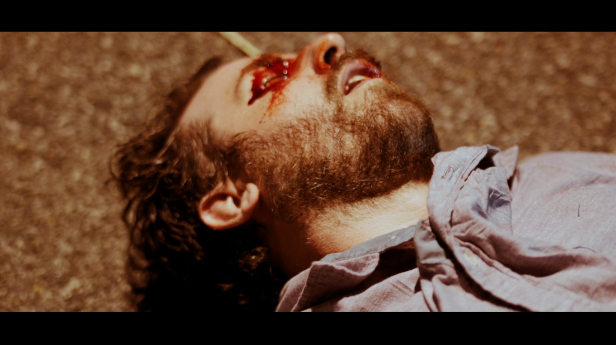 Butt Boy is like Rubber, the movie about the serial killer tire. It is not the kind of film you would show to your grandma and it’s not the kind of movie you would talk about owning with your office coworkers. It features scenes like a grown man and two children saying their prayers before chowing down on debris inside of a man’s colon. Once again that is not a joke.

I normally wouldn’t advocate for such a thing, but I do believe that this movie makes Tyler Cornack an animal abuser owing to a scene where a dog is covered in what looks like baked beans designed to replicate feces and stuffed into a toilet wet. It’s hard to replicate with a screenshot but the dog is shivering and looks genuinely terrified. This is probably the point where most moviegoers would turn on the film.

The first two acts of the movie will have you asking a lot of questions. The third act will answer them in a way that makes you regret having any curiosity for the rest of your life.

Rating: B+ but not for butthole.